Q. What is the criteria needed to become a member of the West Coast DI Association?
A.  A prospective member must be either a currently active duty DI on the field in good standing, or has successfully completed a tour of duty in MOS 0911/8511.

Q. Is it possible to be a member of both East Coast & West Coast Drill Instructor Associations?
A.  Yes, assuming you meet the required criteria.

Q. How do I insert information I have into the West Coast DI Association Bulletin Board?
A.  Send your information to Gregg Stoner, Secretary of the WCDIA. If approved, your information will be forwarded to the webmaster for insertion.

Q. Do you accept donations?
A. Yes.  Donations are always greatly appreciated and are tax-deductible (check with your accountant).

Q. Is there a DI Locator on this site?
A. Yes–it is located here.

Did You Know That 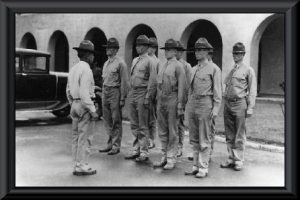 Prior to the conception of the recruit depots and Drill Instructor Schools, noncommissioned officers at the various posts and stations trained newly joined Marine recruits in the “principles of military movements” and the use of the rifle. The quality of training was as varied as the number of bases and noncommissioned officers. In 1911, MajGen. William Biddle, 11th Commandant of the Marine Corps, determined that such training was inadequate and established the first centralized recruit depots at Norfolk, Va.; Philadelphia; Mare Island, Calif. and Puget Sound, Wash. By 1915, East Coast recruit training was centralized at MCRD Parris Island, S.C. In 1923, MCRD San Diego assumed the duties as the sole recruit depot for the West Coast. During World War II, the Drill Instructor Schools were first established at both depots, but shortages of drill instructors needed to train the influx of new recruits forced the schedule to cover only a couple of weeks. In 1947, academic instructors were added to supplement the staff at the schools and the training syllabus was expanded to ten weeks.

During the Korean War, recruit training was once again in high gear and Drill Instructor School was reduced to 3 1/2 weeks. Exceptionally qualified privates first class were admitted to the school until 1954 when enrollment was restricted to noncommissioned officers.

Today, Drill Instructor School strives to be the premier leadership school in the Marine Corps. It encompasses over 500 hours of academics, physical training and practical application over an 11-week course. Not only are students given a thorough review of all military skills, but they are acquainted with an intensive indoctrination in the conduct, regulations, and procedures governing recruit training. The students also undergo a comprehensive leadership package which includes time management, communication skills, and counseling. Squad instructors continuously evaluate and counsel their respective students to ensure maximum performance. 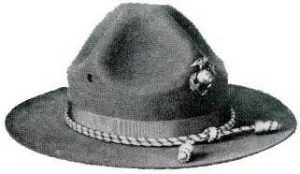 Formally known as the field hat, the campaign cover was commonly worn by Marines of the early 1900’s. First issued in the late 1800’s, it was made famous by Marines who fought in Nicaragua, Haiti, and China. Its official issue was discontinued prior to World War II, but Marine Corps shooting teams retained it for its functionality.

The 21st Commandant, General Pate, directed that the campaign cover be issued to drill instructors in 1956. Prior to this drill instructors wore the utility cover or garrison cap with the appropriate uniform of the day. Intended to serve as a symbol of their responsibility and authority, the new issue of campaign covers was the idea of MSgt. W. G. Ferrigno, Recruit Training Command, Field Sergeant Major at Parris Island. The initial order of 700 covers was procured from the J. B. Stetson Company. The crew of a Marine transport aircraft picked-up the hats at the factory on Friday, July 20, 1956 and flew them to Parris Island. By 0730 the following morning every drill instructor at the Depot had his new “Smokey.”

Only two hat cords are authorized for wear on the Marine Corps campaign hat. A gold cord for flag officers (generals), and scarlet and gold for officers– Both warrant and commissioned.